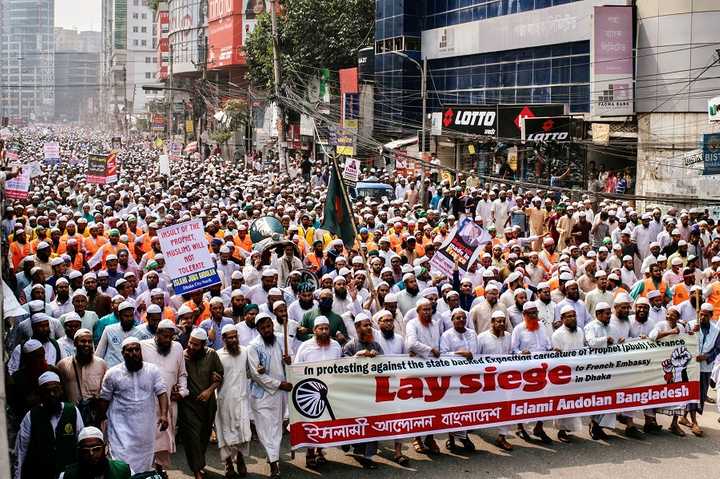 Is there a blasphemy law in Bangladesh?

Criminal offenses related to religion, including defiling places of worship, interrupting services and trespass on burial grounds under Sections 295A and 298 are punishable by law. This is the so-called ’Secular Penal Code’, which is a remnant from the times of the British occupation. The penal code forbids hurting religious sentiments. Other laws, such as the section 57, permit the government to ban the publication of books, films etc.

Bangladesh went from being a secular state in 1971 to having Islam as the state religion in 1988. In fact, Islamism has never disappeared even from independent Bangladesh. Various governments in Bangladesh have placated Islamists demands. After a military coup of 1975, General Ziaur Rahman removed secularism from the constitution and lifted the ban on Jamaat-e-Islami, the largest Islamist party in Bangladeh, which has a history of having taken active role in the 1971 genocide. In 1988, after another military coup, General Hussain Muhammad Ershad passed a constitutional amendment declaring Islam as state religion, which still remains.

What do blasphemy related state repression and mass agitations look like in Bangladesh?

In 1973, poet Daud Haider published a poem in ‘Sangbad’ literary section where he allegedly insulted Prophet Mohammed. A college teacher filed a case in Dhaka court, after which protests ensued. Dhaka saw its first Islamist procession since independence. His house was burned down, and a relative killed. Haider took asylum in Kolkata, India. He later had to migrate to Germany. Sheikh Mujibur Rahman is said to have forced him into exile. Taslima Nasreen released ‘Lajja’ (Shame), a novel set in the backdrop of post-Ayodhya ‘retaliatory’ communal riots in Bangladesh. The last sentence of the book shows the Hindu protagonist’s family leaving Bangladesh for India. The government immediately banned the book. Militant Islamist groups announced a bounty on her head. She got more death threats for her subsequent comments regarding reformation of her ex-religion. In 2015, Attackers in Dhaka have hacked to death a US based Bangladeshi blogger Avijit Roy, whose writings on religion angered Islamist hardliners. Avijit Roy was an atheist who advocated secularism. Recently, there have been many cases where Bangladeshi Hindus have been attacked by lynch mobs based on rumors of them allegedly offending Islam on Facebook. Hindus getting lynched for #BoycottFrance

More than 10 Hindu households were vandalized and torched in Comilla district of Bangladesh after a man reportedly shared a Facebook post on the controversy surrounding publication of Prophet Mohammed's cartoons in France. The incident took place at the Korbanpur village in Comilla on 1 November 2020. The office of the local Union Parishad Chairman Bankumar Shiv and the house of accused, Shankar Debnath, were set on fire. According to locals, Shankar Debnath, a local of the village, on Saturday, reportedly commented on a Facebook post related to France defending cartoons depicting the Prophet Mohammed and showed his support. A case was filed over the incident. However, the police arrested Shankar Debnath and Anik Bhowmik, another accused in the case, for allegedly hurting religious sentiments and sent them to jail on the same day the Islamist fundamentalists attacked them.

The reaction of anti-#France demo in #Bangladesh: Hundreds of #Muslims attacked a #Hindu minority area in a village of Comilla district accusing them of ‚insulting #Islam on #Facebook comment‘ today.They burned several houses.Extremism is an old problem there, now it gets worst! pic.twitter.com/RPDlFX0ic7

Above three are videos of the same event

At least 15 Hindu temples in #Bangladesh have been vandalised over allegations of disrespect shown to Islam on Facebook, triggering panic among the minority community in some areas https://t.co/vTBra1jBNY

The petition needs 100,000 signatures by the end of November to get a response in the White House

We encourage you to sign it at the earliest