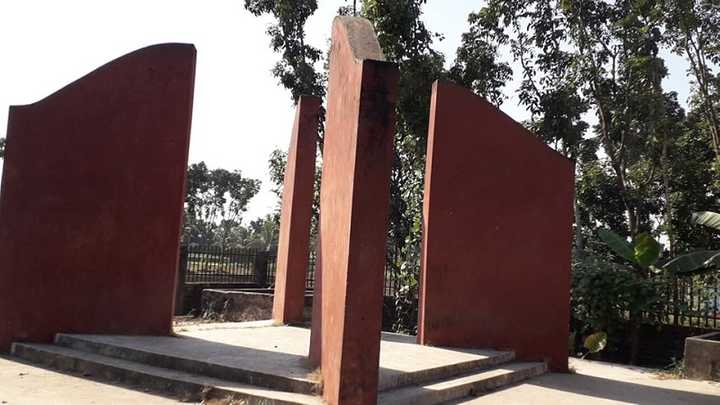 In the morning hours of 16 May 1971, 6 vans of the Pakistan Army arrived at Jogisho village, situated in Durgapur upazila of Rajshahi, Bangladesh. On getting to know about this, the Hindu residents of the village hid themselves at a nearby jungle along with their families. Razakars from neighbouring villages also gathered in Jogisho village. They fished out the Hindu villagers of Jogisho and Palsha villages from their hiding spots, based on the inputs by a postmaster Abdul Qader. The Razakars then brought all the captives to the Jogisho Primary School, and separated the Muslims and Hindus into separate queues. 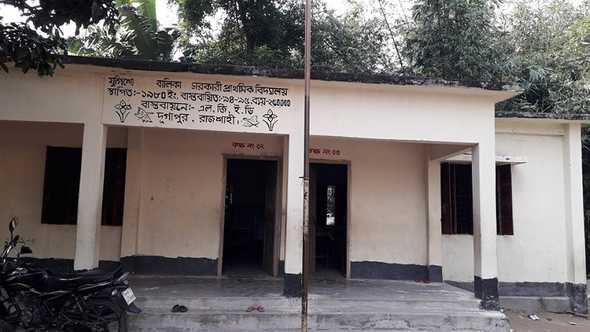 The Pakistani forces then took the Hindu group away to a secluded hut and then pounded them with their gunstocks till their spines cracked and they buckled down. Then they killed them with machine gun burst fire. Those who didn’t die instantly and showed signs of movement, were stabbed with bayonets. According to the witnesses, human blood and brain matter lied splattered on the ground and the wall of the hut. Then they took whatever remained of the 42 bodies and dumped them in a nearby pond and buried the bodies with soil. While leaving the village, they looted the empty houses of the Hindus and took away whatever valuables they could find.1

Dr. M. A Hasan, in his book জুদ্ধ ও নারী (War & Women), have written testimonies of widows of Jogisho village in it2. One of them was a widow named Malati, who was a mother of 6 children in 1971. Her husband, Ramprasad, was a farmer and also used to sing and write folk songs. She said “I was married at the age of 8. My maiden home was in Jogisho. Before the war, everything was very good in this village. Nobody harassed anyone here. Anyone could walk freely inside the village without fear. All of this changed since the war started. The Pakistani military entered the village and took all the Hindus they could find, including my husband. That day, the Pakistani army, along with the chief razakars of the village Abdul and Khurshid, took my husband from my home. I immediately took my children and hid in the nearby jungle. When night fell, I returned to the village where I got to know that all the 42 Hindus that were taken captive were killed. I took my children and my mother-in-law along with me and left for India, accompanying thousand others who were fleeing to India…” Like her, there were many other testimonies of Hindu women recorded by Dr. Hasan in his book, who talked about how Hindus were targeted especially, some of the victims being picked up in the name of “Hindu-Muslim peace committee meeting”.

2. Memorial erected in Jogisho for the victims of the massacre. Source - sonalisangbad.com

A memorial has been erected by the Rajshahi Zila Parishad at Jogisho which contains the names of the 42 victims of Jogisho and Palsha villages. According to reports by Sonali Sangbad3 and Shaptahik Proshanti4, neither the families of the victims are given their pension, nor are the bodies recovered in 2006 were identified for cremation.

In 2016, a local leader affiliated to Awami League, Rustom Ali, breached the walls of the memorial and vandalized it, taking the plaque containing the names of the victims and placing it in Khankah Sharif in the village.5,6 Birendra Nath Pramanik, son of Vibharan Chandra Pramanik, who was murdered in the war, said that "42 Hindus, including my father, were killed during the Liberation War because they were given in by Abdul Aziz Sarkar of Bakhtiyarpur village, the union coordinator of the Hindu-Muslim Peace Committee of the Pakistan Army. The mass grave (about five hundred acres of land) was officially walled to commemorate them. Rustom Ali Khankah Sharif has occupied that place.” Rustom Ali denied the allegations of occupying the mass grave and said, "I have land next to the mass grave. And the place of mass grave has been bought. So I have the right to do whatever I want in my place." 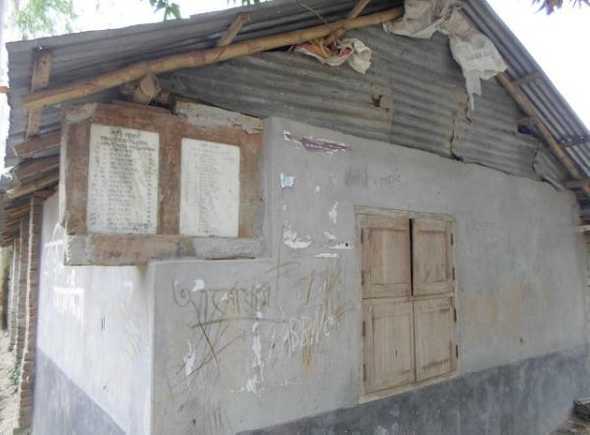 Rustom Ali added "The Hindus in the village are conspiring against me." None of their conspiracies will work." A classical excuse and accusation that has been used against the Hindu minority in the erstwhile East Pakistan and Bangladesh today, to dehumanize the ostracized community.