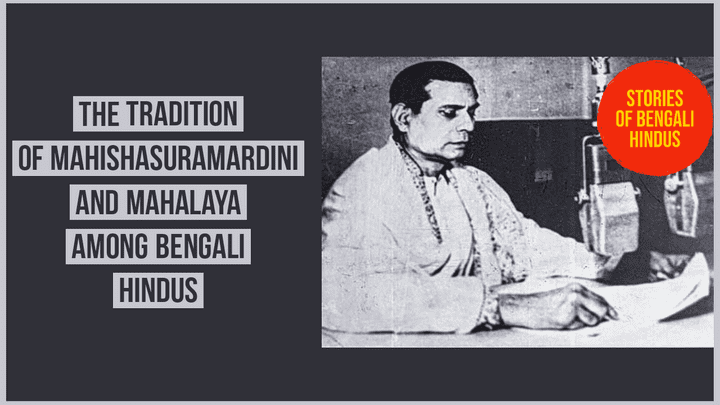 A peek into the history of All India Radio Mahishasuramardini - the reason why people wake up at 4 am on Mahalaya!

All India Radio Mahishasuramardini traces its origin to the initial days of the radio service of Kolkata, which incidentally came in the form of the Indians day broadcasting service under the ages of the Indian Broadcasting Company in August 1927. In the beginning of the radio service in Kolkata programs were broadcast live and they comprised mainly songs and music of eminent artists of that time. However, in due course programs with other flavors in hues started to be broadcast. One such program was Betar Bichitra conducted by the multi-talented Baidyonath Bhattacharya, better known by his pseudonym, Bani Kumar. In 1931, Bani Kumar presented a piece, resembling the oratorio titled Basanteswari, based on the events described in Markandeya Purana. This was broadcast on the morning of Shukla Ashtami at the time of conjunction between Basanti Puja and Annapurna Puja.

While Bani Kumar, influenced by Pandit Ashoknath Shastri, wrote the entire script , most of the songs of the program were set to tune by Harish Chandra Bali. Few of the songs were composed by Pankaj Kumar Mullick. Bani Kumar himself along with Birendra Krishna Bhadra handled the oration. While Raichand Boral took care of the direction. During those times of live broadcast, the program became a resounding success and the entire team behind it was so encouraged with this that they, supported by the then program director Nripen Majumdar, thought of presenting another program on the similar lines the following year. However they decided to shift the program to Autumnal, or the Sharodiya Durga Puja, to get maximum audience.

The origin of Mahishasura mardini, the slayer of Mahish asura, can be traced to the legend of Shri Rama. Shri Rama was fighting the demon king Ravana in order to rescue his wife Sita, whom the demon had abducted and held as hostage in his kingdom of Lanka. A fierce battle was on. In that battle Rama was not able to get the better of Ravana so He decided to seek the blessings of goddess Durga, the symbol of Shakti, in order to defeat Ravana. Durga Puja was not traditionally observed, however Shri Rama decided to perform the Puja. From this point onwards, the Puja was referred to as Akaal Bodhan or ‘untimely invocation’. For that Puja, 108 blue lotuses were needed, but Shri Rama could manage to find only 107 as Maa Durga had hidden the 108th flower to test Shri Rama’s devotion. Without that one lotus the Puja would be incomplete and Rama was at the verge of laying down one of his eyes, lotus shaped and blue in color, at Maa Durga’s feet as a sign of His devotion. At this point, Maa Durga appeared and granted Her blessings. Eventually, Shri Rama won the battle and defeated Ravana. The time Shri Rama did this Puja was during the Autumn season, thus from that time onwards, Durga Puja has been celebrated in Autumn. Originally it was celebrated some time around April, hence in Bengal it was called Basanti Puja. The Autumnal Puja started taking greater significance.

When the program was shifted the following year in 1932, Basanteswari gave way to Sharodiya Bandana, which was broadcast on the morning of Mahashashti (sixth day of Devi Paksha). That year, however, there was a change in the music department. Harish Chandra Bali and Raichand Boral were involved in composing only a couple of the songs, while Pankaj Kumar Mullick handled the bulk of the compositions. The elaborate compositions made the legend of the epic battle more and more accessible to the masses via Mahishasuramardini. The legend not only described the victory of goddess Durga over Mahishasura but it was an allegory of good prevailing over evil. In a pre-independent India, embroiled in the freedom struggle against the British colonizing forces, Mahishasuramardini represented the freedom struggle in the hearts of every Indian.

The following year, in 1933 the broadcast time was yet again changed to coincide with Mahalaya, the day when Pitr Paksha gave way to Devi Paksha. It was done so since the day was a holiday, during when Tarpan is performed to pay respect to the ancestors and departed souls in the family, to get an even bigger audience.

From 1934 to 1935 the full form of the oratorio took its final form. The year 1936 was an important year for the radio service in Kolkata as it got renamed as All India Radio that year. In the same year Sharodiya Bandana, too, was renamed as Mahishasuramardini and broadcast live from 4 am in the morning in the format we have come to recognize today.

We also have a video on this article