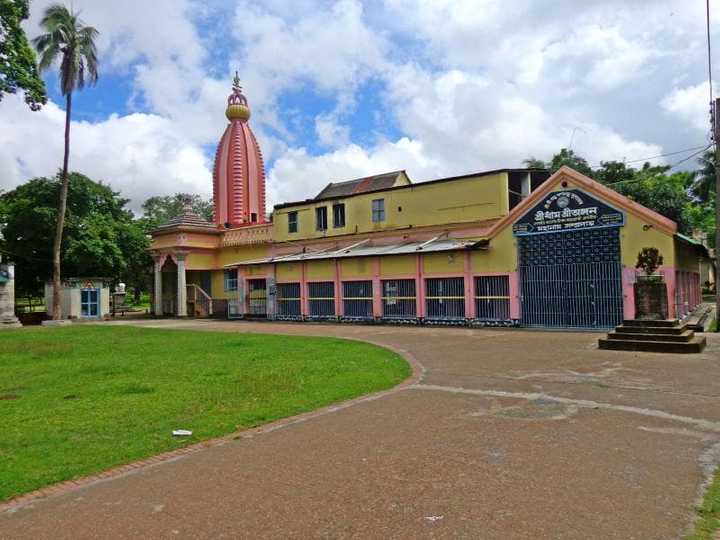 The Faridpur campaign of the Pakistan Army’s genocide of Hindus in 1971 started from the Sri Angan Ashram.1,2,3,4 Located in the Golchamot locality of Faridpur town, in present-day Bangladesh, The Sridham Sri Angan Ashram was set up by Prabhu Jagadbandhu Sundar, a Hindu Vaishnava saint of the Mahanam sampradaya, in 1899.5

Pakistan Army entered Faridpur on 21st April 1971 and kept it under siege for 9 months till the end of the Bangladesh Liberation War. During that time, the Pakistan Occupation Forces, along with the Urdu-speaking co-conspirators and Razakars, had conducted scores of killings.6,7 Around evening while marching through Golchamot locality, the Pakistan Occupation Forces stopped by the Sree Angan Ashram on hearing the kirtan. The soldiers surrounded the premises and entered the Ashram by brute force. Some of the monks who lived there fled the Ashram on seeing the soldiers. However, nine of them refused to leave the Ashram. At that time they were singing kirtan at the prayer hall of the temple. The Japanaam Sankirtan had "Jai Jagatbandhu Hari! Jai Jai Jagatbandhu Hari!" in it. The soldiers mistook the chants as "Jai Bangabandhu'' and were convinced that the monks were chanting for victory to Sheikh Mujibur Rahman.1,8 The soldiers then stormed inside the hall and dragged the monks outside, to the elephant apple tree adjacent to the temple. One monk, Nabakumar Brahmachari escaped and hid in the nearby vegetation behind the Mountain Rose flower trees.8 The remaining eight were queued in front of the soldiers. According to Nabakumar Brahmachari, twelve shots were fired on the monks. The monks chanted "Jai Jagatbandhu Hari'' as they fell down. The soldiers and the Razakars looted everything valuable they could find in the Ashram. The next morning, the corpses were taken away by a municipality truck. On 26 April, the Pakistan Army destroyed the shikhara of the temple with dynamite.9 Some of the monks, including Nabakumar Brahmachari, returned just after the killing and the loot and recovered the holy remains of Prabhu Jagatbandhu and carried them in a basket, escorting them through the enemy lines to India. It was first brought to Mahauddharan Math, Kolkata, followed by Mahendrabandhu Angan at Ghurni, Krishnanagar.

The eight monks who were killed by the Pakistani soldiers were

According to Rabindranath Trivedi, who was retired Additional Secretary and former Press secretary to the President of the People's Republic of Bangladesh, Captain Jamshed who had commanded the massacre and the subsequent desecration of the temple, committed suicide in front of the altar of Lord Jagatbandhu Sundar a few days before the surrender of Pakistan Army on 16 December 1971.10 According to the testimony of freedom fighter Prabodh Kumar Sarkar, Captain Jamshed became a lunatic before his suicide in front of Prabhu Jagatbandhu. The monks returned after the liberation of Bangladesh, restoring the holy relic and rebuilding the damaged temple.10

In 1996, Eight black plaques were raised for the eight deceased monks in the compound of Sri Angan by the Ashram authorities. Every year on 21st April, these plaques are garlanded with flowers by local Hindus and resident monks, and their sacrifices to protect the relic of Prabhu Jagatbandhu in the face of sure death are remembered.11

Despite being the first victims in the Faridpur campaign of the genocide, the Bangladesh government has not made any memorial for the slain monks.12

The black plaques constructed for the slain monks. Courtesy - kopotakkhonews24.com