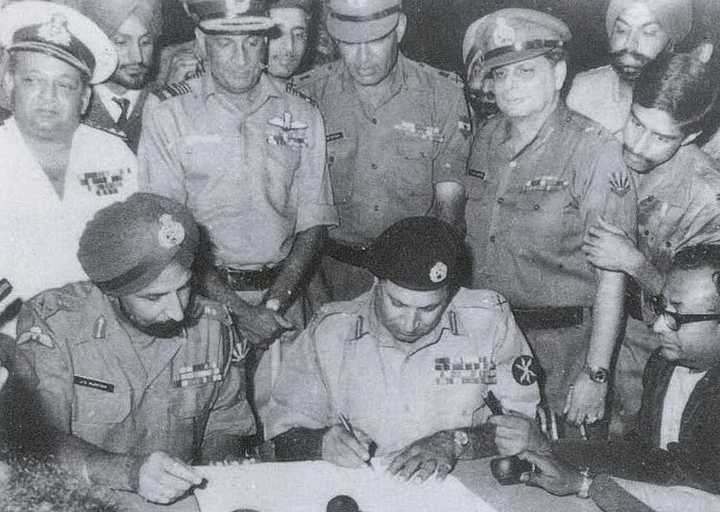 On the 3rd December 1971, Pakistan Air Force conducted Operation Chengiz Khan and carried out preemptive strikes on forward air bases of India.1,2 This started a formal declaration of war from India3, and the Bangladesh Liberation War finally ended on the 16th of December, with the surrender of the soldiers of the Pakistan Army.

03 Dec 71 Pakistan initiates war on India. India retaliates, executing one of the best military operations ever, liberating Bangladesh and taking 93000 Pak army prisoners. The war lasted just 14 days before Pak surrendered to the Indian might. pic.twitter.com/ATqoi7KOO6

The Bangladesh Collaborators’ (Special Tribunal) Order was enforced by the then Prime Minister of Bangladesh Sheikh Mujibur Rahman in 1972 to hold trials of those accused of collaborating with the Pakistan army. This was followed by the adoption of International Crimes (Tribunal) Act of 1973 to “provide for the detention, prosecution and punishment of persons for genocide, crimes against humanity, war crimes and other crimes under international law”. Its jurisdiction extended to “all irrespective of nationality, who as members of any armed defense or auxiliary force, committed crimes of humanity, crimes against peace, genocide, war crimes, violation of any humanitarian rules applicable in armed conflicts laid down in the Geneva Conventions of 1949...”.4 However, 195 personnel of the Pakistan Army, who were considered to be the masterminds of the massacres and rapes committed during the War, never had to face the music!

So what happened to the Pakistani soldiers?

The Shimla Agreement of the 2nd of July 1972, which was done to ensure a smooth transition to normalization of diplomatic relations, was followed soon by the Delhi Agreement between Bangladesh, India and Pakistan on 28th August 1973.5,6 According to the Delhi Agreement, under the supervision of UNHCR, there would be exchange of the captives of the three countries, ensuring each of them return to their respective countries.

India had with itself 6500 Prisoners of War, which included those 195 soldiers along with General A.A.K. Niazi, their commander in East Pakistan. They were ceremoniously sent off to Pakistan, thereby further reducing the chances of them facing a trial. Niazi was the last person who left India for Pakistan.7 This repatriation was done based on an assurance from the then Attorney General of Pakistan Mr. Yahya Bakthiar, who orally testified in the International Court of Justice on 4th June 1973, that “The Government of Pakistan reiterates its readiness to constitute a Judicial Tribunal, of such character and composition as will inspire international confidence, to try persons charged with the alleged actions.”8,9

These were not done with plain bonhomie though. Zulfiqar Ali Bhutto had, at that time, taken hostage the 400,000 Bengalis who were in West Pakistan at that time.10 16,000 Bengali civil servants were discharged from Pakistan and were barred from leaving the country. Bangladesh alleged that many of the Bengali officers of the Pakistan Army were put in "concentration camps." At a press conference on August 10, 1972, Bhutto said that if Bangladesh believed that “it had a kind of veto over the release of our prisoners, there is a veto in our hands also.” He requested China to use its veto power to bar Bangladesh from becoming a member of the United Nations. Bhutto insisted that Pakistan would recognise Bangladesh only after Pakistani prisoners were released.11

We need to first look at how Pakistan convinced the International Court of Justice for the repatriation. Pakistan had first made the commitment of trial of their soldiers, in their application to the International Court of Justice (ICJ) for the repatriation of Pakistani prisoners of war (POWs) from India to Pakistan. Within it, Pakistan also claimed that under the Geneva Conventions of 1949 and the Genocide Convention, 1948, India was under an obligation to promptly repatriate POWs to Pakistan. According to Pakistan, the allegations, which involved genocide, could not amount to crimes against humanity or war crimes since, during the war, Bangladesh was a part of Pakistan, only Pakistan could try the alleged offenses. Pakistan also argued that even if an international tribunal could try the POWs, there could not be any such tribunal in Bangladesh because of the prevailing hatred toward the alleged perpetrators. This gradually led to the case being taken off the registry of the ICJ on the 15th December 1973, at Pakistan’s instance, without any formal judicial settlement.12

Then there was also the geopolitical compulsion (the recognition of Bangladesh as a sovereign state in the United Nations) and consideration of the safety of the Bengalis stranded in Pakistan. Gary J. Bass, Professor of Princeton University and author of “The Blood Telegram” had stated that the 1971 victory was not as militarily decisive as in the case of World War II, after which the victors could try the crimes of the vanquished. As a consequence, it was not feasible for the leadership of Bangladesh to cling on to the policy of demanding that members of the Pakistan Armed Forces be tried by a tribunal in Bangladesh.13

In the years that followed, the promised trial of the 195 soldiers has not materialized. Pakistan never formed any judicial tribunal to try those who were responsible for crimes that they conceded could amount to genocide.

The War Crimes Fact Finding Committee of Bangladesh had made a list of war criminals, who were directly involved in crimes against humanity and mass murder. This included 369 officers of the Pakistani occupation forces, 852 Razakars, 64 members of Al-Badr, 78 members of the Bihari community who had collaborated with the Pakistani Army, 106 political collaborators and 128 members of the ‘East Pakistan Central Peace Committee’ formed by the Pakistanis during the war. The main perpetrators of the war crimes, the 195 Pakistani soldiers, remained out of the reach of the courts. On 30 July 2009, at the Second International Conference on Genocide, Truth and Justice in Dhaka, the Minister for Law, Justice and Parliamentary Affairs stated that no Pakistani would be tried under this law and it would only be applied to Bangladeshi nationals. Although this evidently was against the legal provision of 1973, which argued that perpetrators should be punished irrespective of nationality, the prospects of jurisdiction over Pakistan appeared bleak.14

Focusing simply on the foot soldiers and collaborators, while the actual masterminds, commanders and those in control remained out of reach, caused a dangerously corrupted process from the start. The inability to reach those having the greatest responsibility and guilt greatly undermined the transparency and fairness of those trials. In later years, many such collaborators got milder punishment as compared to the atrocious crimes they committed, particularly targeting the Hindus. Justice delayed ultimately led to justice being denied!